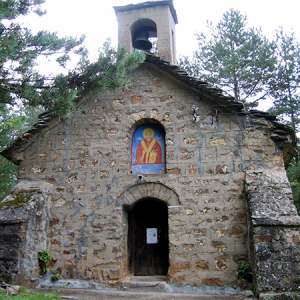 The church is located in the cemetery of the central neighborhood of the village. The local people called it “the Latin Church”. According to the legend the church is built in 12 century by Crusaders who had had a military camp in locality “Kreta” not far from the village.

The church is one nave, one apse and is slightly dug into the ground without a dome and belfry built recently. The thickness of the walls is 70 cm ending on its top with a beautiful arch. The roof is covered with stone slabs.

There is a story that during the Ottoman rule the local villagers buried the church under the ground to hide it from the eyes of the Turks and thus protect it from looting and destruction. Perhaps this act is connected with the decree from 1737 of the 24th sultan of the Turkish Empire Mahmud I „The wicked“ which has ordered the destruction of all Christian religious places.

The church in Bukovec is finally unearthed and restored in 1981 in connection with the celebration of 1300 anniversary of Bulgaria.