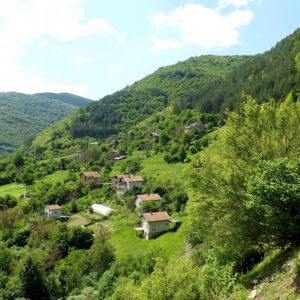 Bakyovo is a village in Western Bulgaria, Sofia region, Svoge municipality. According to the Civil Registration and Administrative Services, on 15 March 2015 the village has 16 inhabitants. The village of Bakyovo is a preferred destination mainly for residents of Sofia during the summer and warm months of the year. It is visited by tourists – along the Batuliyska river. Many of the visitors of the village are Sofia citizens with villas in the settlement. The village is most populated during the months of May – September. Each year, around  September 5, a fair is organized in the village, where mostly permanent and temporary residents are involved. Traditionally this is the autumn feast, which offers a kurban-soup and a grill for the all guests.  It is always held on the square of the village – in front of the only shop.

Geography
It is located in the Murgash area of the Western Stara Planina, scattered in several neighborhoods in the folds of the mountain. The Batuliyska River passes through the village.