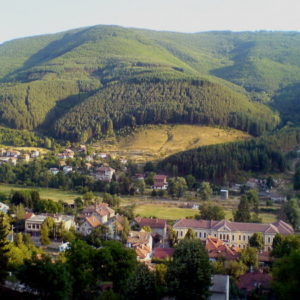 The village of Iskrets is located 10 km west of Svoge and about 50 km from Sofia. It can be reached from the capital by two routes – one being along the Road II-81 through Kostinbrod and by turning right on Road ІІІ-164 after Buchin Prohod, and the other – through the Iskar Gorge along Road ІІ-16 and by turning left on Road ІІІ-164 in Svoge.

The territory of Isprec falls into the temperate continental climate. The climate of the village of Iskrets is famous for its uniqueness. The presence of a specific microclimate characterized by very clean air and the insignificant number of foggy days, which makes it suitable for the treatment of people with lung diseases, has been found along the Iskretska River in the early 20th century.

The village is situated on two rivers – the smaller one is Kozla, which flows from Buchin prohod, and the bigger – Iskretska river. Near the settlement there are three groups of karst springs, known as Iskretski springs. The valley from the south is sheltered by the wooded slopes of Mala Planina, and from the north by the Karst Heights of the Ponor Mountain, dotted with ovals, rock wreaths, carriages, mines, caves with various calcific formations, waterfalls. On individual sections of the surface of Ponor there are fossils of marine invertebrates from 250 million years ago when the mountain was a sea bottom. Here are the habitats of very rare and protected plant and animal species.

The nature of the village of Iskrets is very beautiful and therefore it is frequently visited by the lovers of the Bulgarian village. On its territory there are many caves, including Dushnitsa (total length 876 m), Mechata dupka (total length 142 m, which is the famous Mecha dupka at the village of Mecha Polyana), Izviraloto (total length 240 m) and others. They are the subject of frequent tourist visits by cave lovers. Dushnika cave is one of the most interesting in the Ponor Mountain because after the final siphon you can enter the great water system of the mountain, which starts from the pine trees in the northern part. There are facts that confirm this assumption. For example, the stopping of the water from the Iskretski spring twice for 24 hours after the earthquake in Svoge in the spring of 1979 and the second time for 7 hours in the spring of 1981 at maximum flow. There must be huge caverns to absorb that amount of water, especially in spring high water. However, the siphon in Dushnitsa is very narrow, and another way to penetrate this system should be sought.