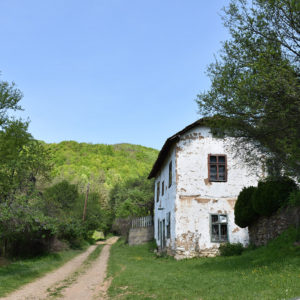 The village of Bukovets is located 25 km southeast of Svoge and 35 km from Sofia. The village of Bukovets can be reached from the capital by car along Road ІІ-16 to the village of Rebrovo and then a right turn for another 15 km. It’s about an hour’s ride. The territory of the village of Bukovets is 37,261 sq. km and borders with the lands of the villages of Svoge Municipality – Batuliya, Bakyovo, Ogoya, Osenovlag, Brezovdol, Leskovdol and Redina. The average altitude of the village of Bukovets is 1000 m. The population of the village, according to data from 2013, is 18 inhabitants. The feast of the village is on Petrovden, and every year on St. Pantaleimon’s day, in the area of St. Pantalei, a kurban is made by the inhabitants of the villages of Bukovets and Ogoya. The village of Bukovets is located at the foot of Chukava peak and is named after the centuries-old beech forests, among which lies.
The village of Bukovets was founded in the 11th century. In the Gradovska Chukla locality there was a fortified site, where, according to local legends, the population of the surrounding villages has found shelter from the coming Turks. Despite the courage of the defenders, the Turks managed to conquer the fortified site. One of the most famous families in the village are Kosovete (the Blackbirds). This is one of the families that participated in the founding of the village and took active part in the protection from the Ottoman invaders. There is a legend that the family originates from Turnovgrad, where after the battle between the Bulgarian and Ottoman armies led by Patriarch Evtimii and Sultan Bayazid I the Lightning, many people ran away in the Balkans, seeking refuge and salvation from the Ottoman yataghans. A group of people headed west. In a very clear morning, a blackbird landed on the leader’s shoulder and then flew into the woods. The group also decided to enter the woods, and the bird continued to constantly land on the leader’s shoulder. When they reached the Gradovska chukla locality – they decided to build a village with the help of several other local families. People began to call the leader of the group – Kyosa, because of the bird that had landed on his shoulder and brought them to this hidden and peaceful Balkan place. Later his descendants were called Kyosove (Blackbirds).

Landmarks
The village church of St. Nicholas was built in the early Middle Ages by crusaders who had a military camp in the Creta locality, not far from the village. During the Ottoman rule, the local peasants buried the whole church with dirt to hide it from the eyes of the Turks, and thus to protect it from plundering and demolition. And all these years, the peasants hand over the memory of the buried church from generation to generation, expecting better times for Bulgaria.