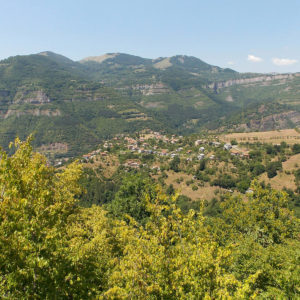 Bov is a village in western Bulgaria. It is located in the Municipality of Svoge, Sofia district, 57 km north of the city of Sofia.

History
The inhabitants of the village of Bov have created a legend, serving as a tourist attraction. According to it, the village bears the name of the French knight Saint de Boeuf, captured by the warriors of Tsar Kaloyan, who became his vassal. After the death of Emperor Baldwin Flanders in 1206, the marquis received the favor of the Bulgarian ruler to settle with his companions on the land of today’s village. The traditional congregation of the village of Bov is celebrated every year at the church feast Spasovden.