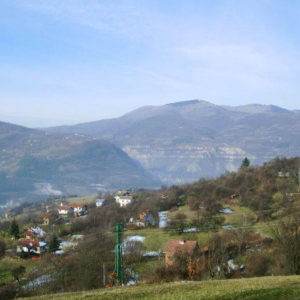 Zhelen is a village in western Bulgaria. It is located in the Municipality of Svoge, Sofia district.

Geography
The village of Zhelen is located in Western Stara Planina, more precisely in Golema Planina.

Cultural and natural landmarks
Beautiful views of the entire Iskar Gorge. An hour drive from Sofia. Mechata dupka is located about 3 km northeast of the village of Zhelen, Western Stara Planina. There are three entrances – a lower one leading to the water part of the cave and two upper ones leading to two parallel wide galleries and a common hall from which side galleries are branched. One of these galleries has a connection to the water floor. The waters of Mecha dupka are poured into the Iskar River through the Treskavets River. To the right of the common hall there is a labyrinth of low galleries and halls, the floors of which are covered with crumbling crust and snot barriers. In places there are cave pearls. Typical cave fauna – cave beetles and moths. Bones of a cave bear were found. The cave is of interest to many tourists who can explore it. To the northeast, at a height of 1200 m, near the Izdrimets peak are the remains of the Treskavets hut.

Regular events
Ilinden.Курбан на кръста Светого Илия, the largest kurban organized in the village. It is organized by 4 families. Every guest of the village, every casual traveler is welcome. Everyone can try the lamb kurban soup, boiled in the live fire, everyone can understand how good a man is the Balkan man. The kurbans on the territory of the village are 10 in total.