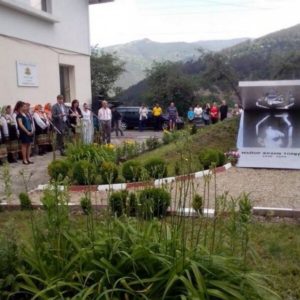 Thompson is a village in western Bulgaria. It is located in the Municipality of Svoge, Sofia district. The village celebration is on May 24th.

Geography
It is 35.5 km away. from the center of Sofia. The Thompson village is located in the Iskar River Gorge. It is a stop on the Sofia-Mezdra railway line.

The Thompson village was formed in September 1960 by the unification of the populated areas of Babul, Gara Thompson, Zavoya, Livage, Lipata, Malak Babul and Tserovi stragi. It was named after the British Major Thompson, a liaison officer between the British Army and partisan groups, who in 1944 was captured and shot in the neighboring village of Litakovo.

Cultural and natural landmarks
Iskar Gorge;
On May 13, 2007, a memorial of Major Thompson was opened in front of the building of the village’s mayoralty.