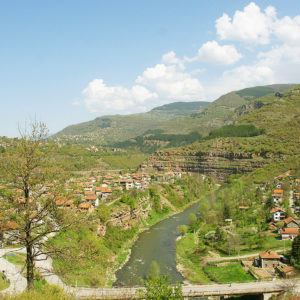 The village of Tserovo is situated 6 km north of the town of Svoge and is situated on the two banks of the Iskar river. its territory is bordered by the lands of the town of Svoge and the villages of Zhelen, Gara Bov, Zasele and Dobarchin. The lowest houses are at 400-500 m above sea level, and the highest at 900-1000 m. The displacement is 600 m in a very rugged area. Its land is 17.5 sq. Km. The population – 1567 people. Mayor of the village of Tserovo is Petar Petkov. The village celebration is on a different date in June, but always six days after the Holy Spirit – 1st Sunday after Pentecost – to All Saints. The name of the village comes from a species of oak (Quercus cerris) and remains unchanged. Once there were cerous forests that were destroyed as a result of economic activity related to the livelihood of the population. A special impetus in the development of the village is the passing of the Sofia-Roman central railway line to the Iskar Gorge itself and its commissioning in February 1897. Many stone quarries were found at the time of its construction, in which mostly Italian workers were employed. Many Bulgarians learn the stonework craft from them. In the region, the most experienced are the Tserovski stonemasons. After the crossing of the railway line, the so-called Tserovski stone (red Triassic sandstone), which is very used in Sofia for paving slabs, becomes particularly popular. The railroad itself attracts numerous staff and maintenance workers.

The beauty of the Iskar Gorge begins to reveal itself magnificently right in the land of the village of Tserovo. The rocks on both sides of the river are like a cross section of the Stara Planina chain. By seeing them, one experiences both admiration and awe in front of this spectacular sight. They are over 250 million years old and are built of Triassic sandstones.

The most distinctive landmark of Tserovo is the natural phenomenon Dzhuglata. The rock formation is located near the railway station of the village of Tserovo. This queer lonely rock that survived the Iskar River’s peak is formed by Dolomitrian red-and-white quartz sandstones, about 250 million years old and 18 meters tall. According to some it resembles a sponge, while according to others, it even looks like a human head. Dzhuglata was declared a natural landmark in 1964. They say its name comes from the modified word Kuklata (Doll), but nobody knows for sure.

There is plenty to see in Tserovo, and for the fishermen, the surroundings of the Little Water Power Plant are just paradise.